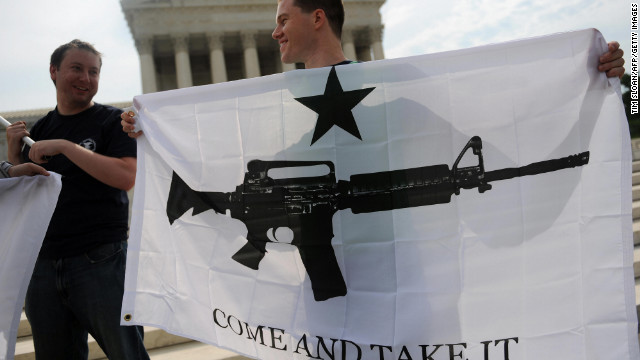 (CNN) Justice Clarence Thomas opened the floodgates for all sorts of gun safety laws to be challenged in federal court.
Thomas changed the test courts are to use when analyzing the constitutionality of such regulations.
The ruling will also likely prompt a bevy of new legal challenges, with gun rights proponents now able to push more aggressive arguments for why a restriction should be struck down.
Lower courts have looked at, first, whether the regulated activity falls within the scope of conduct protected by the Second Amendment.
"Despite the popularity of this two-step approach, it is one step too many," Thomas wrote Thursday, calling the second step inconsistent with the Supreme Court's previous gun rights precedents.
Courts are required to "assess whether modern firearms regulations are consistent with the Second Amendment's text and historical understanding," Thomas said.
For instance, he wrote, if a gun law is addressing a societal problem that also existed in the 18th century, it is evidence that the modern law is unconstitutional if there was no similar regulation then.
What the ruling puts in jeopardyThursday's ruling means that for a court to find any type of gun law constitutional, it will have to be consistent with how firearms were regulated historically.
"We therefore can assume it settled that these locations were 'sensitive places' where arms carrying could be prohibited consistent with the Second Amendment.
But regulations for "sensitive places" that reached beyond those historical parallels might be constitutionally problematic, Thomas' opinion suggested.
"But expanding the category of 'sensitive places' simply to all places of public congregation that are not isolated from law enforcement defines the category of 'sensitive places' far too broadly."
Addressing Thomas' examples of historically consistent "sensitive places," Breyer asked what that meant for "subways, nightclubs, movie theaters, and sports stadiums?"
Source