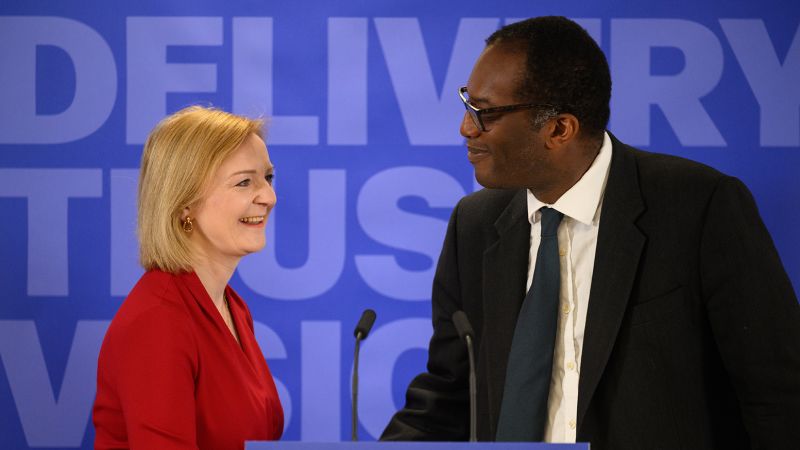 The announcement marks a major and abrupt climb-down for new Prime Minister Liz Truss, whose government has been roiled by the reaction to its proposal for sweeping tax cuts, which included slashing the top rate of income tax to 40% from 45%.
“I stand by the package we announced and I stand by the fact we announced it quickly,” she told the BBC on Sunday.
The proposed cuts of £45 billion ($50.5 billion) would have been the biggest in 50 years.
Truss and Kwarteng said they were vital to shake the United Kingdom out of years of sluggish economic performance.
The government’s decision to hand top earners a big tax cut while millions are struggling to pay their energy and food bills was the most politically controversial element of the plan.
In a rare rebuke, the International Monetary Fund slammed the government’s package, saying it would raise inequality and increase inflationary pressure in the UK economy.
News that the abolition of the top rate of income tax was being reversed sent the pound up about 1.2% to $1.12 on Monday.
Crisis management by the Bank of England has bought the government some time to explain its economic strategy more clearly to investors.
Kwarteng’s efforts to restore the UK government’s credibility with markets continued later Monday when he spoke to the Conservative Party conference.
A powerful committee of UK lawmakers last week urged Kwarteng to publish his plan and the OBR forecasts as soon as possible, rather than waiting until late November.
And it faces questions over how it intends to pay for the bulk of the tax-cutting package that remains.
— Chris Liakos, Duarte Mendonca, Mia Alberti, Kara Fox, Alex Hardie and Julia Horowitz contributed to this article.
Source