'There was blood everywhere': Witnesses describe crackdown on protesting students at Tehran university 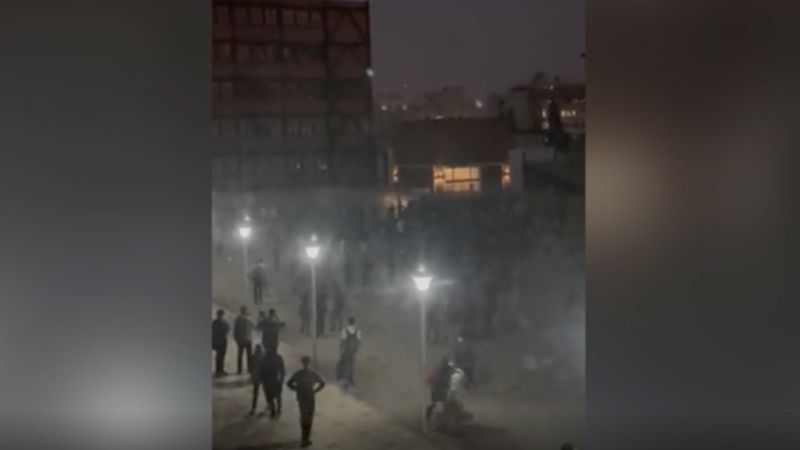 CNN —When Farid’s friend called crying for help on Sunday, he jumped on his bike and quickly rode to Tehran’s Sharif University.
“They were using gases… [that are] banned internationally… it was a war zone… there was blood everywhere.”In one video posted to social media from the scene, police can be seen detaining people and carrying them on motorbikes.
For more than two weeks, protests have taken place in more than 45 cities across Iran, including the capital, with dozens of people reportedly killed in clashes with security forces.
State media outlet the Islamic Republic of Iran Broadcasting (IRIB) reported that at least 41 people have died in Iran in recent protests.
The university’s official newspaper, the Sharif Daily, also reported that security forces fired less-lethal rounds at large groups of students in the campus parking lot while they attempted to flee from security forces on Sunday.
Social media videos reviewed by CNN captured the incident.
The “three main dormitories” of the Sharif University were also “shot at” by security forces, according to Farid, who claimed that there are still students hiding out at the university following Sunday night’s events.
“As we speak, there are still students hidden in the university in the parking lots or in professors’ rooms,” he told CNN.
CNN cannot independently verify what happened during the confrontations at Sharif University or the number of students detained in the aftermath.
Representatives from Sharif University could not immediately be reached for comment.
In a statement Monday, the Sharif University Students Islamic Association urged all “professors and students at Sharif University not to attend classes until all arrested students are released” while calling on students and professors across Iran to pause classes in solidarity.
Today’s protests are also bringing together younger Iranians with internet access who haven’t known Iran before the Islamic Republic.
Source