Manhattan annulment attorney Ryan Besinque (https://www.besinquelaw.com/how-important-is-it-to-consummate-a-marriage/) releases a new article that explains the importance of consummating a marriage in New York. The lawyer points out that once a couple has entered into a marriage, it is presumed they would live together and consummate the marriage through sexual intercourse. However, not all marriages are like this.

"A married partner may only seek an annulment based on specific criteria. In the case of the consummation of a marriage, it is only necessary grounds for annulment if one party has a physical incapacity that prevents them from doing so, and it was discovered after the marriage," says the Manhattan annulment attorney. 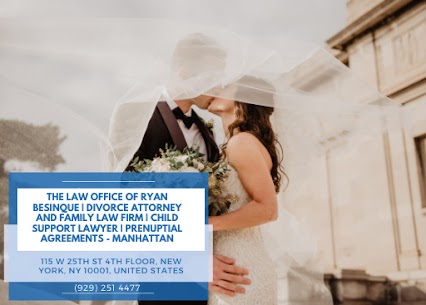 An annulment is when a court declares that the status of marriage no longer exists, the lawyer explains. A marriage can be annulled even though it was valid initially between the couple.

Attorney Ryan Besinque adds that once a marriage is, then it is considered void. The marital records of the couple may remain valid, but they can consider their marriage over. A marriage annulment might render it null but it will not affect the legitimacy, or the responsibilities of the couple when it comes to parenting.

In the article, attorney Besinque lists five reasons that can cause a marriage to be annulled in New York. These reasons include one of the spouses being too young for marriage, one of them being mentally ill, or incapacitated, one of them having an incurable mental illness, consenting to the marriage through force, and the lack of physical capacity to consummate it.

According to the divorce lawyer, “Although an annulment voids the marriage, it does not affect the legitimacy of the children or the couple’s responsibility to them. When there are minor children involved, child custody and support are factors that still must be dealt with in an annulment. The court can order child support, custody, and visitation, similar to a divorce.”

Lastly, the divorce lawyer emphasizes that it is important to seek the help of an experienced attorney when it comes to matters like annulment and child support. Having a skilled lawyer may be able to help the client understand what their rights are and what steps they should take next to ensure a favorable outcome.

About The Law Office of Ryan Besinque

Ryan Besinque, Esq. is an experienced New York City contested divorce attorney. He has witnessed firsthand the financial and emotional toll divorce and separation can take on families during his years of practice. He tailors his approach to ensure that each client is fully represented and feels optimistic about the future. Contact them today at (929) 251-4477 to schedule an appointment.

For more information about The Law Office of Ryan Besinque | Divorce Attorney and Family Law Firm, contact the company here: