Knowledge Train, a professional training and certification company based in London, England, is announcing the release of their new PRINCE2 project management game, designed to help students learn to apply the PRINCE2 project management methodology. The game was created for students who are studying to take the PRINCE2 practitioner certification exams, which, previously, they could only prepare for by taking sample exams or looking at tests from previous years.

PRINCE2 is a popular project management method originally developed as the UK government standard for information systems projects. It is used most often in the UK, Western European countries, and Australia, and encourages dividing projects into manageable stages. The method uses six aspects to define project tolerance and goals, including scope, timescale, risk, quality, benefits, and cost. Then there are seven principles to follow when managing any project, and these must be applied to every project. There are also seven themes, which help project managers decide what to do, or what tools to use. Finally, the PRINCE2 method details seven processes along the project roadmap, from starting up a project, to managing the project stages, to delivering and closing the project. The new PRINCE2 project management game from Knowledge Train can help students learn all of the facets of PRINCE2 so they can be successful in being certified in the PRINCE2 methodology. 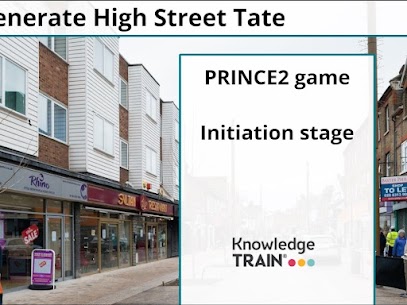 The game involves a scenario of a fictional regeneration programme, High Street Tate, which the local authority has commissioned. Within this programme is a marketing project, which is the basis for the game. Players must arrange a publicity campaign for the regeneration programme. The game takes place over five stages. In the first stage, players are given 15 minutes to prepare for the project, and then an hour for more detailed planning. In the later stages, players manage delivery of the products they’ve developed, and then close the project, per PRINCE2 guidelines. Each section of the game can easily be navigated from the main menu, so players can skip ahead to answer later questions in their current section, and return later to attempt questions they may have missed earlier.

The PRINCE2 Project Management Game can be played solo, or as part of a multiplayer event, with teams of up to 4 people competing against other teams, with three to four groups ideally. When played in a multiplayer group, a moderator might be present to introduce the game, provide a debrief at the end of each section, and answer questions from the teams about their project. The team version of the game can be played in a virtual online environment, or in a single classroom location. The game comes bundled with Knowledge Train’s existing PRINCE2 Practitioner course, and compliments these accredited courses. It can also be purchased as a standalone product.

When speaking about the new game, Knowledge Train Managing Director Simon Buehring says, "Until now, PRINCE2 Practitioner students were only able to practise for their PRINCE2 Practitioner exam by taking sample exams. Whilst this has always been a good way to help pass the exam, it doesn't help to deepen the understanding of the student. Our new PRINCE2 project management game changes this. Students how have a fun and engaging way to help understand how to apply the PRINCE2 methodology. We are confident the game will provide a stimulating way to learn PRINCE2."

He goes on to speak about the use cases for the game, saying, "We think the game is a great solution for organizations needing to train up teams of people in PRINCE2. The team version of the game helps promote teamwork and collaboration by enabling teams of up to 4 students to collaborate together as the project manager. With a facilitator providing feedback, the game can be played over one full day and encourages the teams to compete against each other to deliver the project in the most successful way. We see this as an innovative training solution that really engages students in a virtual or live classroom setting."

For more information about Knowledge Train, contact the company here: