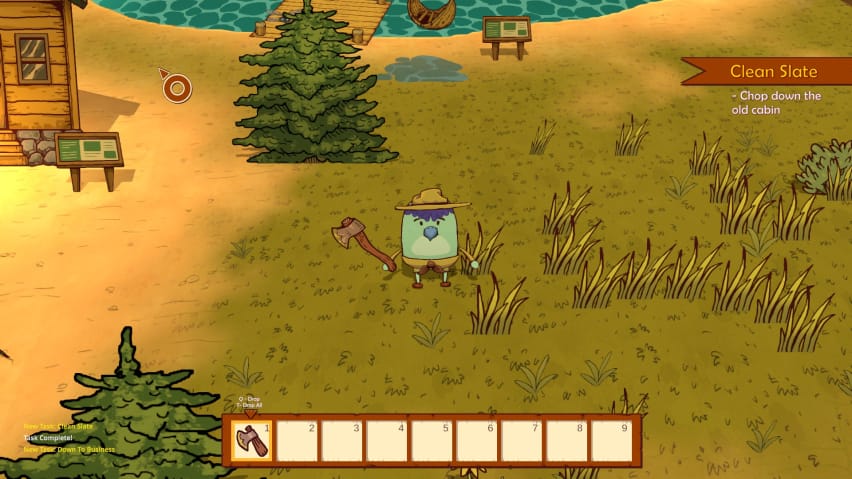 Summer camps have long been a popular setting for supernatural or horror stories, from Friday the 13th to Fear Street Part 2 and the Sleepaway Camp films. There’s just something about the inherent potential for disaster when you take a group of children who may or may not get along with each other and place them under the supervision of a bunch of teenagers, and, if they’re lucky, that one older woman who works as a nurse or head cook. Camp Canyonwood takes the spooky camp trope and runs with it, but with the additional twist that all the staff and campers are, in fact, birds.

Camp Canyonwood follows the protagonist as you take over as the new head counselor at the eponymous camp. Reporting to Vernon the Vulture who could not give less of a toss about the camp, the kids, safety or pretty much anything, you’re on your own to chaperone a ragtag bunch of kids and try and stop them from getting killed. Oh and there’s a sinister jackalope who visits you in your dreams and secret agent bald eagles who cordoned off an area of camp. And your predecessor, Clarence Canary, he’s still missing. No pressure though!

That's what you wanna see when you first get to camp!

Camp Canyonwood runs like a management sim but is much more focused on the story aspect and keeps the actual managing to an extremely small scale. That being said, you have the power to make the camp whatever you want it to be. Want to run it into the ground and make all the campers go home? You can do that. Want to improve the camp and make it a good, fun place to work, despite Vernon? You can do that too. At least, you can in theory.

In practice, Camp Canyonwood is too messy and unbalanced to really motivate you to finish the storyline or even play past one day. Certain mechanics aren’t properly explained - like getting the campers to eat - and those that are explained aren’t balanced to work properly. I had campers falling asleep before noon because they were so tuckered out, but if you don’t do activities with them they get bored and whine and lose interest, so it’s a no-win situation. Even doing activities like fishing is a pain in the butt, because instead of directing all campers to go fish until they catch something, it directs one camper at a time and you need to keep repositioning yourself down the lake. By the time you get your last camper in place, the first one is done again.

Is it weird that I trust him more than the camp director?

Even smaller details in the game end up being frustrating, like your character’s focus changing from one camper to another if they move slightly, making it hard to talk to a specific one, or to focus on a specific part of the environment if a camper wanders into the way. Tasks are also completed excruciatingly slowly, be it knocking down an old cabin or mining a pile of dirt, this shouldn’t take more than 30 seconds and should have a status bar. Additionally, if you click the wrong button in your status bar and indicate that you want to place something in the world, there’s no way to undo it or to click out of that item, you need to place it and knock it down or pick it back up. These seem like small, insignificant issues by themselves, but running into multiples of them, along with the other issues of balance in the game, quickly add up to become exceedingly annoying.

On the plus side, Camp Canyonwood has a fun aesthetic and art style, reminiscent of animated shows like Camp Lazlo actually, and the game’s plot has a lot of promise. Spooky horror camp and weird birds are fun and fresh, but at this point in early access the game is too bogged down by gameplay issues and balancing to really make it worth your while.

TechRaptor previewed Camp Canyonwood on PC with a copy provided by the developer. It will be launching in Early Access for PC on August 4, 2022.